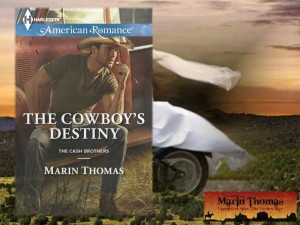 Destiny Saunders is tough, but being left at the altar makes even the toughest gals do some strange things. When she stumbles upon a stranded cowboy—Buck Owens Cash, the best thing to arrive in Lizard Gulch, Arizona, in a long time—she arranges things so they can have a little fun before he rides off into the sunset. The sexy, shapely auto mechanic is just one surprise after another, so Buck plays along to see what will happen.

What happens is love…the kind that makes a man want to prove himself. Then Buck discovers Destiny’s secret—one that will tie her to another man for the rest of her life. Betrayed, he returns to the rodeo circuit determined to forget Destiny…but fate has other plans!

The road curved and Destiny slowed the bike. Buck relaxed his grip on her slender hips as the faint scent of lilacs drifted up his nostrils. He didn’t know if the scent came from her skin or the red locks she’d pinned to the top of her head. He dropped his gaze to the bare shoulder in front of him. Crawling out from the edge of the sleeveless vest was a red, yellow and green lizard, its tongue extended toward a tiny tattooed fly. Despite her petite size, Destiny was solid muscle. Maybe she was a personal trainer at a fitness gym—that would explain her toned arms.

One more mile and the bike slowed to a crawl then veered onto a dirt road badly in need of grading. It wasn’t until the bike crested a small mesa that he spotted the handful of buildings in the middle of the desert. Twin palm trees stood a hundred feet in the air above the buildings and looked out of place in the dusty barren landscape.

His escort coasted into town—if the place even qualified as a town. He counted six structures. The towering palms guarded the entrance to the Flamingo Inn Resort—a seen-better-days motel that had been converted into a trailer park. A gas station with one repair bay and one pump sat at the end of—he read the street sign—Gulch Road. Carter Towing and Repair had been painted in red block lettering across the front of the whitewashed brick.

The Florence Pastry Shoppe, a two-story Victorian-style home, faced the motel on the opposite side of the street. A giant-sized croissant twirled atop a pole mounted to the roof. Three white rockers sat on the front porch.

Instead of driving to the garage, Destiny parked outside Lucille’s Smokehouse Grill and Saloon, which sat next to Dino-Land, a nine-hole miniature golf course whose entrance was guarded by giant plaster dinosaurs, their green paint faded and cracked.

She cut the bike engine and Buck heard the faint sounds of piano music. “What’s going on?”

Uh-oh. Even though Destiny didn’t act upset, he doubted the jilted bride looked forward to informing her wedding guests there was nothing to celebrate. He caught her arm when she stepped past him. “If you want, I’ll tell them the wedding was called off.”

For the first time since they’d met, she removed her sunglasses. Buck sucked in a quiet breath as he felt himself being dragged into the undertow of Caribbean blue waters. The eyes staring up at him were perfectly round and easily the largest feature on her freckled face. “Thanks, but it’s not a big deal.”

Not a big deal? What kind of man had she been engaged to? She climbed the steps to the saloon and he couldn’t help but notice that the white leather pants fit her firm little fanny like a glove. The groom had a screw loose if he let a woman like this get away.

“You’re welcome to come inside for food and drinks,” she said.

The other businesses appeared deserted. The entire population of Lizard Gulch, including the mechanic, Buck guessed, waited inside the bar.

“What’s it gonna be?” She tapped her boot heel against the wooden boardwalk. He took the steps two at a time then held the door open for her. As soon as she entered, the piano music switched to “Here Comes the Bride.” A group of geriatrics stared—mouths hanging open, their gazes swinging back and forth between Destiny and Buck.

A barrel-chested man who wore his long gray hair in a ponytail eyed Buck suspiciously before speaking to Destiny. “I thought you were marrying Daryl? Where’d you find this guy?”

15 Responses to “The Cowboy’s Destiny Blog Tour And Giveaway”