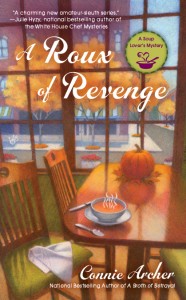 A Roux of Revenge (A Soup Lover’s Mystery)

Snowflake, Vermont, is known for its skiing in winter—and its soup all year round, thanks to Lucky Jamieson’s By the Spoonful. Autumn brings golden leaves, pumpkin rice soup, the annual Harvest Festival…and murder.

Lucky’s soup shop is busier than usual this October, with groups of itinerant travelers in town to work the Harvest Festival. One newcomer seems to take a particular interest in Lucky’s young waitress, Janie, spying on her from across the street. Is the stranger stalking Janie?

After an unidentified man is found murdered in a van by the side of the road, simmering suspicions about the travelers are brought to a boil. But when Janie is put in harm’s way, Lucky must join forces with the travelers to turn up the heat on a killer…

Connie Archer is the national bestselling author of A Spoonful of Murder and A Broth of Betrayal, the soup lover’s mystery series set in Vermont, from Berkley Prime Crime. The third book in the series, A Roux of Revenge, will be released on April 1, 2014. Connie was born and raised in New England. She now lives on the other coast.

I really enjoyed A Roux of Revenge.  The story takes place in a small town called Snowflake, Vermont during the Harvest Festival.  A body dead body is found in a van along side the road ~ only the accident isn’t what killed the unknown driver.  Lucky from “By the Spoonful” wants to help find out who the driver was.

Janie one of the waitresses notices someone starring at her through the front restaurant window a number of times; is this man stalking her?  He is one of the travelers from the band at the Harvest Festival. Janie is upset about a secret her mother had been hiding from her and doesn’t know what to do. She drives to the Harvest Festival and watches the band. She is trying to decide what to do about the man that is stalking her.  She stays a bit to late and notices she is the only one still at the festival – she hurry’s to her car and then ….

You will want to read A Roux of Revenge to see what happens next. Does Lucky find the killer before he strikes again? I can’t wait to read the next  book by Connie Archer.

The author is giving one of my readers a chance to win A Roux of Revenge. Must be 18+ US (48). Leave a comment on what was the last book you read. Extra entry for each way you follow Kaisy Daisy’s Corner. Giveaway ends Apr 25, 2014. Enter daily for more chances to win.

23 Responses to “A Roux of Revenge Review and Giveaway”