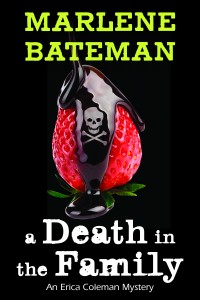 Synopsis of A Death in the Family

Meet Erica Coleman—a gifted and quirky private investigator with an OCD-like passion for neatness and symmetry, a penchant for cooking, (ten terrific recipes are included), and a weakness for chocolate.

In A Death in the Family, the second in the Erica Coleman series, private eye Erica Coleman and her family happily anticipate Grandma Blanche’s eighty-first birthday celebration in the picturesque town of Florence, Oregon. But when the feisty matriarch, a savvy businesswoman, suspects wrongdoing and asks Erica to investigate her company, things get sticky.

Before the investigation can even begin, Blanche’s unexpected death leaves Erica with more questions than answers—and it is soon clear Grandma’s passing was anything but natural: she was murdered. When another relative becomes the next victim of someone with a taste for homicide, Erica uses her flair for cooking to butter up local law enforcement and gather clues.

Erica’s OCD either helps or hinders her—depending on who you talk to—but it’s those same obsessive and compulsive traits than enable Erica to see clues that others miss. When she narrowly escapes becoming the third victim, Erica is more determined than ever to solve the case.

Note: A Death in the Family is the second in the Erica Coleman series.  Motive for Murder was the first. All books stand alone, so you don’t have to read one to understand the next. Another Erica Coleman book will be out next year.

Excerpt from A Death in the Family

“It’s hard to believe she’s gone,” Kristen said dolefully. “When I moved here, I thought I’d have years with Grandma. She was always so active—I thought she’d keep going for years.”

“And all the time, her heart was getting weaker,” Trent said glumly.

Walter commented, “The last time I saw her, Blanche said the doctor told her she had the constitution of a mule.”

There were a few smiles at this, but Martha’s brow furrowed in confusion. “But Mom’s death didn’t have anything to do with how healthy she was.”

“What are you talking about?” Trent’s impatient voice billowed out and filled the small room.

Martha squirmed but fluttered on, “Well, after what Mom said when she came to visit me, you know—about how something wrong was going on in the company—I worried that something might happen.”

Her response reverberated around the room. Everyone went very still—as if they were holding their breath.

Martha’s eyes went from one to another. “I didn’t mean—oh, I shouldn’t have said anything,” she stammered. Her voice was pure distress. “It’s just that . . . well, we’re all family here, so it’s okay, isn’t it? I mean, no one else knows.”

“No one else knows what?” Trent said brusquely.

Visibly flustered, Martha’s hands twisted in her lap. “And . . . and Mother was very old and—and the police haven’t even come, have they?”

Erica wondered what Martha could be getting at. Everyone darted quizzical looks at each other, trying to make sense out of Martha’s confused chirruping.

After meeting blank looks all around, Martha blurted, “I mean, that’s good . . . isn’t it? For the family?”

There was a rumble as Walter cleared his throat. “Why would the police come?”

“Why, to arrest someone.” Martha sounded surprised—as if he had asked something that was completely and absolutely self-evident. She stared at Walter, as if he and he alone could straighten everything out. “Isn’t that why they’re doing an autopsy? I mean, don’t they always do an autopsy when someone has been murdered?”

The author has offered one of my readers a hard copy of this book.  I loved it and I am sure you will too! You must be 18+ US (48).  Leave a comment on what kind of books you like to read.  Extra entry for each way you follow Kaisy Daisy’s Corner. Giveaway ends Apr 21, 2014. Enter daily for more chances to win.

28 Responses to “A Death in the Family Giveaway”