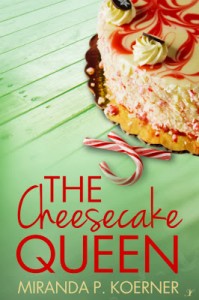 by Miranda P. Koerner
Release Date: 11/21/13
Book Summary:
Sugar Rule 1: Christmas is the perfect time for cheesecake.
Sugar Rule 2: Men are as useful as burnt cookies.
After losing her reporting job to layoffs at the local paper, Caeleah Turner’s pity party at the airport is interrupted by a woman claiming to know the location of the world’s best cheesecake. Intrigued, Caeleah trades plane tickets with the woman and finds herself in Chestnut, Colorado, a tiny town hiding a woman known as the Cheesecake Queen. The Cheesecake Queen not only bakes the best cheesecakes in the country, but her cheesecake is known to cure everything from infertility to baldness—one woman even loses 100 pounds on it! There is a thick batter of secrets behind The Cheesecake Queen and her two sisters, who operate all the bakeries in town.
But as the mayor’s efforts to shut down the Sugar sisters before Christmas gear up, Caeleah finds herself wanting to sample his own treats.
There’s a bigger secret than love to Cinnamon’s cheesecakes. And Caeleah is determined to find out what it is.
About the Author
Miranda Koerner is a writer living in San Antonio, Texas, with her husband and two Chihuahuas. A former children’s magazine editor and reporter for Prime Time Newspapers and the Express-News, Miranda has written for The Current, Taste, Chicken Soup for the Soul and many other publications. Her YA novel The Butterfly Dress was published by Girl E books and is available through Amazon.com and Smashwords. She is anticipating her next novel, Blue Mermaid, with Turquoise Morning Press in April 2013.
My Review

I really enjoyed reading The Cheesecake Queen.  Caeleah had lost her job and was going home to Chicago when she met a lady who talked her into going to Chestnut, Colorado for the worlds best Cheesecake and a story.  When Caeleah arrived she learned there were three sisters who each had a specialty along with their mother.  There pies, cupcakes, cinnamon rolls and cheesecakes where the best thing she ever tasted!  They each had a bakery that they sold their specialties in. People in the town raved about the cheesecake and how one lady lost 75 pounds by eating it morning, noon and night ~ there was something special in the cheesecake and Caeleah was going to find out what and write a story too!  The mayor for some reason did not like the Sugar sisters and was going to close them down.  Does that happen? Does Caeleah find the secret? You will want to read The Cheesecake Queen to find out.
Blog Tour Schedule:
November 21:
Dark Novella – Excerpt
November 22:
V’s Reads – Review
November 25:
FTLOB by JBlog – Review
November 26:
Whatever You Can Still Betray – http://whateveryoucanstillbetray.blogspot.com/ – Promo Post
Never Too Fond of Books – http://www.mandikayereads.com – Review*
November 27:
Between fantasy and reality – Review
Alwaysjoart – Excerpt