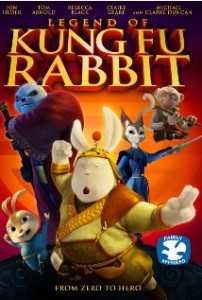 I guess Rex and I did spend a lot of time in front of the TV this weekend. I think we watched 3 or 4 DVD and lots of football.  We previewed Legend of Kung Fu Rabbit which was a great movie. Let me tell you a bit about it and then my thoughts at the end.

PROGRAM DESCRIPTION
Experience the adventure in the all-new animated feature Legend of Kung Fu Rabbit arriving on
DVD, Digital Download and Video on Demand September 24 from Lionsgate Home
Entertainment. With a cast headlined by Jon Heder (Napoleon Dynamite), Tom Arnold (Hit and
Run) and Academy Award® nominee Michael Clarke Duncan (Best Actor in a Supporting Role,
The Green Mile, 1999) along with pop singing sensation (the smash hit “Friday”) Rebecca Black
in her feature film debut, the Legend of Kung Fu Rabbit follows Fu as he embarks on a journey
to become a kung fu master. Awarded the DOVE Foundation Seal of Approval, the Legend of
Kung Fu Rabbit DVD, including a behind the scenes featurette and a sneak peak at “Miniscule,”
with four award-winning animated shorts, will be available for the suggested retail price of
$19.98.

Even though Legend of Kung Fu Rabbit was more for kids than Rex and I we both loved it.  We really liked the cast and the music that was in the DVD.  I also liked the Asian feel and how well it was depicted.  The story was very cute about Fu starts on his journey to become a king fu master. Fu was the least likely to become a master – he was clumsy and was a bit on the big side.  I think it is a good lesson that if you put your mind to it you can do anything! This is a movie the whole family can enjoy together.

You can enter to win a copy for yourself.  You must be 18+ and have a US shipping address. Extra entries for following ENMNetwork on Facebook. Extra entry for each way you  following Kaisy Daisy’s Corner. Giveaway ends Sept 28, 2013.

I am a member of the Entertainment New Media Network, and we help promote, sometimes for a promotional fee, entertainment industry projects we find meaningful. As always all opinions are my own. For a full disclaimer, visit www.ENMNetwork.com/disclaimer