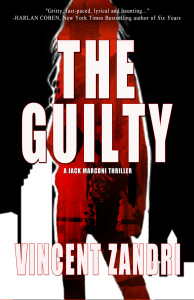 Jack Marconi is back. In The Guilty, Jack finds himself investigating a local restaurateur who’s not only obsessed with the sexy, dark romance novel, Fifty Shades of Grey, he’s accused of attempting to murder his school teacher girlfriend. As the now brain-damaged young woman begins recalling events of that fateful winter night when she was allegedly pushed down the front exterior stairs of a West Albany mansion, she becomes the target of the angry foodie/sex-obsessed boyfriend once again. Only this time, he’s cooking up a plot to keep her silenced forever.

Vincent Zandri is the No. 1 International Bestselling Amazon author of THE INNOCENT, GODCHILD, THE REMAINS, MOONLIGHT FALLS, THE CONCRETE PEARL, MOONLIGHT RISES, SCREAM CATCHER, BLUE MOONLIGHT, MURDER BY MOONLIGHT, THE GUILTY, MOONLIGHT SONATA, CHASE, and more. He is also the author of the Amazon bestselling digital shorts, PATHOLOGICAL, TRUE STORIES and MOONLIGHT MAFIA. Harlan Coben has described THE INNOCENT (formerly As Catch Can) as “…gritty, fast-paced, lyrical and haunting,” while the New York Post called it “Sensational…Masterful…Brilliant!” Zandri’s list of publishers include Delacorte, Dell, StoneHouse Ink, StoneGate Ink, and Thomas & Mercer. An MFA in Writing graduate of Vermont College, Zandri’s work is translated into many languages including the Dutch, Russian, and Japanese. An adventurer, foreign correspondent, and freelance photo-journalist for Living Ready, RT, Globalspec, as well as several other news agencies and publications, Zandri lives in New York.

What an interesting book.  I couldn’t put The Guilty down once I started to read it. Jack was to investigate what happened to Harold Sanders  a world renowned architect, daughter.  She was dating Robert David Jr. and one night he said that she fell on the ice and then trying to get her in the car he dropped her a number more times.  She had brain damage and was in a coma.  What happened that night?  He need to have Jack find out ~ he knew there was more to the store.  Mr. Sanders didn’t know about that secret room in the basement or how Robert David had a different side of him – whips, pain, 50 shades of gray.  You will need to read The Guilty to see what happened and what happens now.