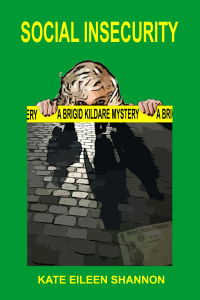 Synopsis
Brigid Kildare is not your typical hard boiled private eye. But she doesn’t pretend to be. No matrimonial. No child custody. No bodyguard or surveillance work. No process serving. Brigid is strictly data. Asset searches, background searches, computer security, pre-employment screening, and basically any type of records research is what she deals in. And you really could not expect anything else. After all, your average five foot tall, blue eyed, blond (one friend describes her as looking like a Christmas tree angel) is rarely the person you would send out after a bail jumper. Oh, and there is that whole one leg thing – ADA aside, most people don’t think of an amputee as the go to person for a security job.

But in SOCIAL INSECURITY, the first in the Brigid Kildare Mystery Series, professional PI, Brigid Kildare, turns amateur sleuth when old ladies in the Federal Hill area of Providence start to go missing and she can’t get the police to believe her. As her assistant and long time friend, Kevin, puts it: “Honey, if an old lady like Jessica Fletcher can do it, a one-legged PI and her gay PA can do it too!” Brigid solves the mystery, along with an odd cast of friends and family, but not before four old ladies have died, she has caught the eye of a handsome Providence detective, and she discovers that not everyone who is close to her is what they appear to be.

About Kate Eileen Shannon
Kate Eileen Shannon is a Writer, Artist, and sometimes Real Estate Agent – as she says, ‘a purveyor of ephemera and bagatelle’. Trifles. Little things. Here today, gone tomorrow. In other words, a little of this, a bit of that.

She has had three husbands and two children; lived in Ireland, Rhode Island, and Florida; owned a brake repair shop, an art gallery, a farm, and a boat building business; been a Realtor, a title examiner, a real estate closer, and a government employee which led her straight to being unemployed, laid off, made redundant.

Kate is currently living in Rhode Island overlooking the water and a lighthouse; with her husband, Dick Thomas (who won’t let her have a cat); where she spends her time painting, drawing, and of course working on the next book in the Brigid Kildare mystery series, MEDITATED MURDER.

Thank you Kaisy for inviting me to be a guest on your blog. Someone asked me the other day what are the challenges of writing  about a sleuth who has a disability. To be honest, no challenge at all. The challenge will be getting people to believe an amputee does all the things Brigid Kildare does. But from the disability angle, it is all real because the fictional Brigid is based on a real person.

I don’t think anyone would create a protagonist with a disability unless they had intimate knowledge of the subject. At least I would hope they wouldn’t. There are elements of the story people will find unbelievable but there are things people will readily recognize, such as a prosthetic with a blade for running, that they wouldn’t have a few years ago.

There are things that are pure invention. And by that I do not mean I made them up, I mean I physically invented them. There is a scene in the book where a “break away leg” is discussed. Almost thirty years ago, when my daughter was four, she decided she wanted to take up horseback riding. I won’t bore you with the details of what I went through to find someone who would give lessons to a four year old amputee, but I finally succeeded. We ran into a problem during the first lesson. Were she to unavoidably fall off the horse, she could not get the prosthetic foot out of the stirrup. Well that would certainly be dangerous as she would be dragged. By the second lesson, I had come up with the break away leg. I took her most recently discarded prosthetic and unscrewed the hinges at the knee. I cut the leg of her pants so there was an upper part on that side like shorts and the lower part, covering the prosthetic, was for appearance and not really attached. In the event she fell, which fortunately she never did, the lower half would stay in the stirrup but she would fall free of it. Why undo the hinges at the knee, why not just cut the pants? Because at that age she had to wear a belt around her waist as she couldn’t manage a suction socket. And even when older she had an attachable belt she sometimes used as the suction didn’t always hold for certain activities.

Heather Mills was known to me before she was ever a blip on Paul McCartney’s radar screen. There was an article about her in a British tabloid. She showed how she unscrewed the foot of her prosthetic to replace with a foot shaped for a high heel. That made my life a living hell as my daughter read the article and was then at the age where she wanted to get her first pair of heels. And let me tell you, medical insurance does not cover spare feet for different shoes. I could have told Sir Paul that woman would be trouble. Prosthetics have advanced and you can now get one that has something in the ankle that adjusts so different height heels can be worn, but not really extreme heels, for that you would still need a special foot and very good balance.

So for me, writing about a sleuth with a disability is no challenge at all. It will just be a problem getting the reader to believe that yes, an amputee can do all those things and sometimes be very creative at managing to do them.

Thank you again Kaisy for having me here and let me just mention the second book, Meditated Murder, will available shortly. And as I am explaining on this tour, it is a serial as opposed to a series. Visit some of the other tour stops to find out what that means. Be sure to comment at each stop to increase your chances of winning one of the books and be sure to leave your email address. . I’ll be announcing the winners on my blog one week after the tour closes, on September 9th.

I liked Social Insecurity ~ I loved Brigid Kildare.  Brigid was a smart girl and started saving  money and buying property at 16.  She was also had a prosthetic leg and was a bit of a detective.  She had lots of friends.  She rented some of the condo’s and apartments she owned to some older woman – and arranged that their rent was very low so that they could afford their rent. Then 4 of the old ladies move out and the strange thing was they didn’t mention their moving to Brigid who made a point of visiting with them often.  When Brigid reported them missing to the police they just said – there was nothing strange about people moving. So Brigid and her PA start doing some searching along with the handsome police detective Earl.  What do they find out? Are they able to find the ladies before it is to late?  What would someone want with these women that had no money?  You will need to read Social Insecurity to find out.

5 autographed paperback books will be given away across the tour

The chances of winning increases with blog visit each blog and leave a comment.