The Corpse With The Golden Nose
By Cathy Ace 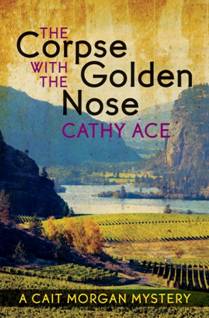 A heartfelt plea to look into the death of a world-famous vintner goes hand in hand with the opportunity to attend an exclusive gourmet event in British Columbia’s stunning wine country. How can overindulgent foodie and criminologist Cait Morgan resist?

Sure that the award-winning owner of a family-run vineyard was murdered, Cait shares her findings with Bud Anderson, a retired homicide cop. But he is convinced that the woman took her own life, whatever her grief-stricken sister might say. That is, until death strikes once again, in the neat rows of grapevines that clamber up the banks of magnificent Lake Okanagan.

Uncovering obsessions that might have fuelled murderous thoughts among the victim’s wacky neighbours is a start, but as Cait unravels the clues, she realizes that more lives are at stake. Can she think, and act, quickly enough to thwart the killer?

The Corpse with the Golden Nose is the second book in the Cait Morgan Mysteries, a classic whodunit series featuring the eccentric Professor Cait Morgan. 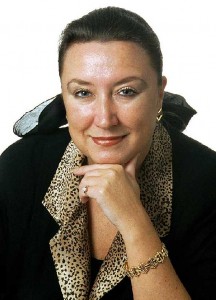 Welsh Canadian mystery author Cathy Ace is the creator of the Cait Morgan Mysteries, which include The Corpse with the Silver Tongue and The Corpse with the Golden Nose. Born, raised, and educated in Wales, Cathy enjoyed a successful career in marketing and training across Europe, before immigrating to Vancouver, Canada, where she taught on MBA and undergraduate marketing programs at various universities. Her eclectic tastes in art, music, food, and drink have been developed during her decades of extensive travel, which she continues whenever possible. Now a full-time author, Cathy’s short stories have appeared in multiple anthologies, as well as on BBC Radio 4. She and her husband are keen gardeners, who enjoy being helped out around their acreage by their green-pawed Labradors.

Cathy Reads From Corpse With The Golden Nose.

Book 1 of this series

What a great story The Corpse With The Golden Nose was.  Cait Morgan and Retired police officer Bud Andersen get invited to join in the biggest foodie event in British Columbia.  They were invited so that maybe they could solve the mystery of Ellen’s sister Annette’s death.  The police claim suicide ~ Ellen things murder.  Things are going great until there is another murder.  So now they have two deaths to investigate.  Could they be related?  You will need to read The Corpse With The Golden Nose – the second book in the Cait Morgan series.  I need to read the first one –  I enjoyed this one so much.

The author has offered to send one of my readers a  signed Paperback of The Corpse With The Golden Nose.  You must be 18+ and have a US shipping address.  Leave a comment on your favorite type of books.  Extra entries for each way you follow Kaisy Daisy’s Corner.  Giveaway ends on Aug 3, 2013.

28 Responses to “The Corpse With The Golden Nose Tour, Review and Book Giveaway”