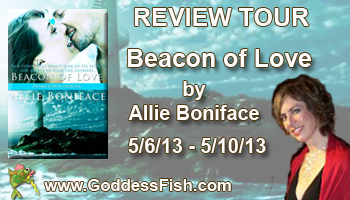 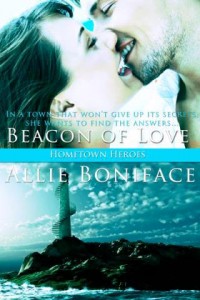 Welcome to Lindsey Point, Connecticut: suspicious of outsiders, loyal to tradition, and absolutely devoted to its local legends.

Enter Sophie Smithwaite, feisty travel show host, in town to film an episode about Lindsey Point’s haunted lighthouse. But digging into the story of a tragic murder-suicide and love gone wrong reveals startling connections to Sophie’s own past. When a gorgeous local handyman fills in behind the camera, Sophie’s life gets complicated by more than just her family history.

Part-time paramedic, handyman, seasonal Santa-Lucas Oakes does it all–except get attached. He’s still reeling from the death of his best friend ten years ago and the more recent infidelity of his ex-fiancee. Yet despite Sophie’s big-city nosiness and her insistence on chasing long-dead ghosts, he’s drawn to her.

But mixing with an outsider means questioning people and traditions Lucas has always defended. When a series of attacks seem to be connected to Sophie’s investigation, both Sophie and Lucas must decide if they are willing to risk everything to uncover the town’s secrets…and their own.

“Want something to drink? Water?”

He set the glasses down on the counter. “What?”

“Come over here and kiss me.”

His smile crooked. “Or what?”

She took two steps toward the kitchen, and he took one toward the living room, and they met in the middle. “Or I’m going to go crazy.”

He placed his hands on her cheeks and kissed her forehead.

Sophie closed her eyes, waiting for the slow, inevitable slip of his mouth down her neck. To her curve of her collarbone. Maybe lower.

“There you go,” he said. His hands went away.

“You said you wanted a kiss.”

Her fists landed on her hips. “Ha ha. Funny guy. So funny, in fact, I think I’m gonna recommend that comedy special you were talking about to Lon. He’s looking for a new show, you know. Maybe you’re the next big thing.”

Lucas swung her off the ground. Her arms went around his neck and her mouth ended up a fraction of an inch below his. “Maybe I am.” He kissed her again, this time not on the forehead. And not sweetly. “What do you think?”

But she couldn’t answer, couldn’t think of anything at all except his tongue teasing hers, her legs wrapping themselves around his waist and holding on like she’d never held onto a man in her life. Fire sizzled up her spine, and the air in the room went hot. Her hands–God, her hands couldn’t get enough of him. They wanted to be everywhere, in his hair and on his face and unbuttoning that damn shirt and taking off her own dress that was so in the way right now. 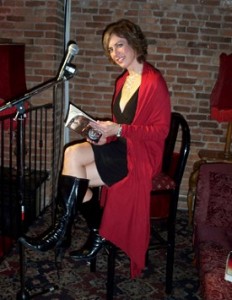 Allie Boniface is a small-town girl at heart who’s traveled around the world and still finds that the magic and the mystery of small towns make them the best places to fall in love and find adventure. From the New England coast to Rocky Mountain hotels to tiny European bars, she’s found more character and plot inspirations than she could ever count. Currently, she’s lucky enough to live in New York’s beautiful Hudson Valley with her own “Hometown Hero,” a guy who can fix, build, drive, and grill anything and is the epitome of the strong and silent type.

When she isn’t writing love stories, Allie is a full-time high school English teacher who gets a kick out of helping her teenagers negotiate the ups and downs of writing along with the ups and downs of life (because, really, she’s still trying to do the same thing!). And while she’ll continue to travel far and wide, Allie knows there’s really nothing like coming back to the place where the people who have known you forever welcome you home with open arms.

This was a great story – It kept me reading till the end.  Sophie comes to Lindsey Point to do a story for TV on a haunted lighthouse.  While in town she meets Lucas who is dealing with guilt over something that happened in high school.  Sophie and Lucas meet and there is are some fireworks.  Then some weird lights are seen at the lighthouse – could it be a ghost from the past? Or is it someone from town.  What does Sophie find out about her past in Lindsey Point?  You will need to read Beacon of Love to find out.  I am sure you will like it as much as I did.

16 Responses to “Beacon of Love Book Tour and Review”