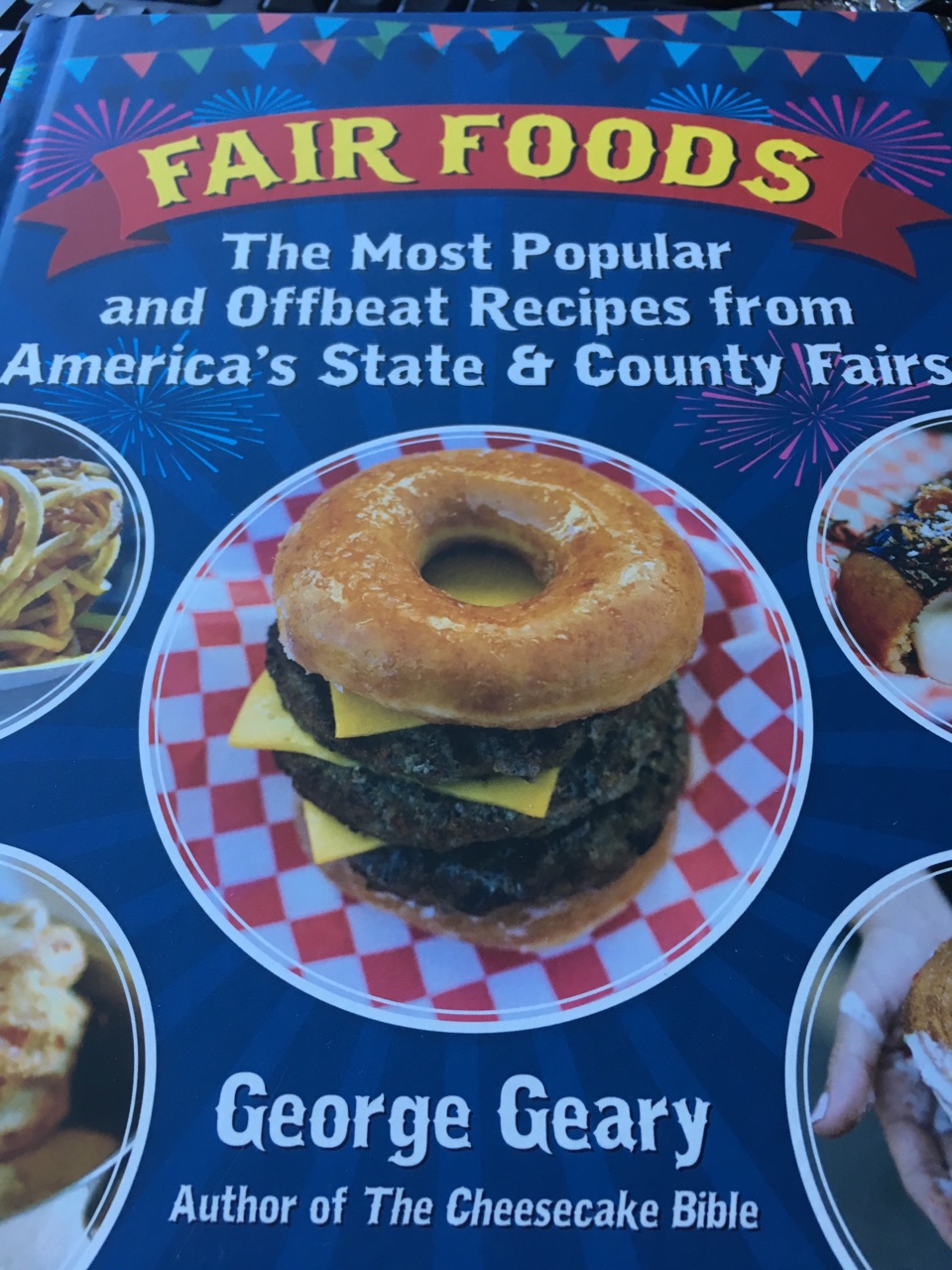 Going to the fair was always a big part of my summer growing up.  I was in 4-H and always baked, knitted and even did woodworking projects.  My Dad was a judge for the woodworking section so we would spend a couple days at the Seymour Wisconsin Fair. I remember going on the rides and of course trying all the great food! Rex and I are going to the fair this weekend and I can’t wait.

Here is a fun cookbook – Fair foods – The most Popular and Off Beat Recipes from America’s State & County Fairs.

Fair Foods is an illustrated cookbook featuring the recipes of the most popular and offbeat food served at state and county fairs across the USA.

Each page in Fair Foods is lavishly illustrated with both vintage and contemporary photographs of America’s most beloved fair foods, as well as fun and lively images of rides and attractions and nostalgic ephemera. Fair Foods is not only mouthwateringly addictive, it also captures the joy and spirit of America’s greatest state and county fairs.

George Geary is an award-winning chef, best-selling author, and renowned educator. A former pastry chef for the Walt Disney Company, Geary is a Certified Culinary Professional, and was recently chosen as the Culinary Educator of the Year by the International Association of Culinary Professionals. He is perhaps best known for creating all of the cheesecakes for The Golden Girls and other top-rated television programs. Geary has worked as a critic and/or judge for ABC’s The Taste with Anthony Bourdain, The American Baking Competition with Jeff Foxworthy, Hell’s Kitchen, Supermarket Superstar, and many other popular television shows. He also teaches cooking classes aboard Holland America Lines.

For over thirty years, Geary has been a culinary contest judge for major food manufacturers such as Canola Producers, Veg-All, Hormel Foods, the Hershey Company, Knott’s Berry Farm Foods, Ghirardelli Chocolate, Fleischmann’s Yeast, the San Diego Union Tribune, ABC News, and many more. From 1982 to 2010, George was the culinary coordinator of the Los Angeles County Fair.

Geary is the author of L.A.’s Legendary Restaurants, as well as nine cookbooks including The Cheesecake Bible, The Complete Baking Cookbook, and 125 Best Cheesecake Recipes. He is presently the featured chef on the San Diego Living television show on the CW Network. Geary lives in Los Angeles.

I am sure you will find lots of good recipes that you will want to try.  I can’t decide if I want to make some Frozen Cheesecake on a Stick or maybe some Fried Guacamole Bites. What would you try?

You can purchase your book below from Amazon.

“Disclosure of Material Connection: I received one or more of the products or services mentioned above for free in hope that I would mention it on my blog. Regardless, I only recommend products or services I use personally and believe will be good for my readers. I am disclosing this in accordance with the Federal Trade Commission’s 16 CFR, Part 255: “Guides Concerning the Use of Endorsements and Testimonials in Advertising.”