What do you think of the cover? I like it! Don’t forget to enter the giveaway below. 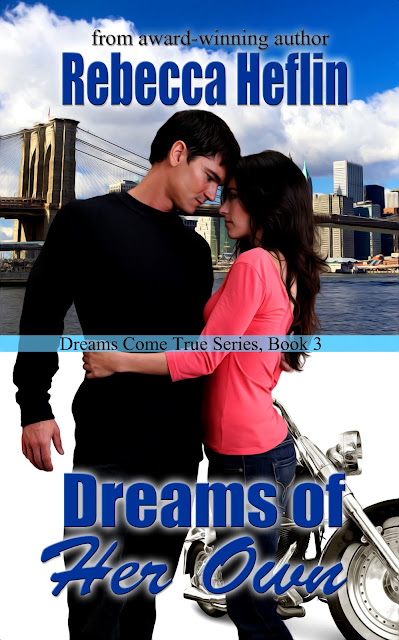 DREAMS OF HER OWN
Dreams Come True #3
Rebecca Heflin
Releasing November 2015
Soul Mate Publishing, LLC
Can even the unlikeliest of dreams come true?

He sees a spinsterish misfit.

If the Guinness Book of World Records had a category for the world’s most boring life, Millie Stephens knows she would hold the record. After the plain, strait-laced personal assistant is saved by a total stranger from becoming New York City’s latest traffic fatality, she has a disheartening epiphany: her life’s highlight reel didn’t exist. Determined to step out of the shadows and take a walk on the wild side, she starts Millie-style – by making a list.She sees a stereotypical thug.

That total stranger, bad boy Ian Brand, is more than the sum of his parts. Beneath that sexy, tattooed exterior is a man with a painful past who’s desperate to both hide and overcome his disability in the pursuit of his dreams. But his decision to bid on a large construction project could both lead to his downfall and reveal his secret. Will Millie and Ian look beneath the surface and see there’s more to each other than meets the eye?

If the Guinness Book of World Records had a category for the world’s most boring life, Millie Stephens knew she would hold the record.Bundled up in her brown wool coat against the chill of a New York fall, she hurried down the Brooklyn sidewalk to the pharmacy to pick up a prescription for her boss.

As personal assistant for best-selling romance author, Darcy Butler-Ryan, Millie kept her calendar, edited her manuscripts, handled her social media, and through her agent, Gloria Madison, scheduled her public appearances, among other duties. Since Darcy had become pregnant, Millie had also taken it upon herself to run errands and generally oversee Darcy’s health and well-being.

Thus, the trip to the pharmacy for Darcy’s anti-nausea medication.

She consulted the day’s to-do list to see what other errands were on it. Lists were her life. They provided organization, structure, and a sense of accomplishment. She loved ticking things off her list so much that if she
accomplished something that wasn’t on the list, she’d write it down just so she could have the pleasure of marking it off.

She had a list for everything. Errands. Tasks. Books to be read. Special dates to remember. If something needed doing, she had a list for it, all appropriately categorized, of course. Shoving her errand list into her coat pocket, she stopped at the corner and waited for the walk signal. As soon as the light changed, she stepped out into the pedestrian crosswalk, anxious to get to the pharmacy and out of the cold. She glanced to her left and froze, as
a delivery truck barreled down the street as if the red light meant nothing. And as if she truly were invisible.

Fear stole her ability to move and she scrunched her eyes closed hoping death would at least be quick. She strived for invisibility, but now she’d give anything to stand out.

Next thing she knew she was yanked from behind and hauled up against a hard object, bands of steel around her waist, her feet dangling in the air.

“Are you okay?” a gruff male voice asked, his breath warm in her ear.

She nodded, unsure if she could do any more than that.

“I’m going to set you back on your feet. Do you think you can stand?”

Nodding again, she realized the hard object at her back was a man’s chest, and the steel bands were his arms. She slid down his body and felt the sidewalk beneath her feet. A wave of dizziness washed over her.

“Breathe,” her rescuer encouraged. He turned her to face him, his hands on her shoulders, and she looked up and into eyes the color of a winter-gray sky, earnest with concern. His already tousled sandy blond hair ruffled in the wind whipping around the corner, and his chin bore the stubble so many women were
fond of.

She inhaled deeply, drawing in the scent of something spicy and leathery. “Better?”

“You should always wait after the signal changes before you cross a street. I’ve got an appointment. You’re sure you’re okay?”

“Be more careful next time,” the stranger in the leather jacket said before he turned to walk away.

Millie managed to put one foot in front of the other for another block before coming to a bus stop and collapsing onto the bench. Her legs shook, her hands quivered, and she struggled to take in a deep breath. All she could think about was how your life was supposed to flash before your eyes when confronted with a near-death experience, and hers . . . didn’t. Instead it was like a film projector that had run out of film – just a blank screen. What did that mean?

It meant, Millicent Grace Stephens, that your life has been so boring that the highlight reel was nonexistent. Her thirtieth birthday was right around the corner, and what had she accomplished with her life?

Not much, that’s what.

She recalled the hard strength of her rescuer’s chest against her back. The rough and tumble look of him. She’d bet her first edition autographed copy of Edith Wharton’s Age of Innocence, that his life wasn’t boring. That if he had a
near-death experience he’d have a highlight reel worthy of an action movie.

Rising on still-wobbly legs, she drew in a long, slow breath, and resumed her errand in an I-almost-died daze. Rebecca Heflin is an award-winning author who has dreamed of writing romantic fiction since she was fifteen and her older sister snuck a copy of Kathleen Woodiwiss’ Shanna to her and told her to read it. Rebecca writes women’s fiction and contemporary romance. When not passionately pursuing her dream, Rebecca is busy with her day-job as a practicing attorney.Rebecca is a member of Romance Writers of America (RWA), Florida Romance Writers, RWA Contemporary Romance, and Florida Writers Association. She and her mountain-climbing husband live at sea level in sunny Florida.