Don’t forget to enter the giveaway below! 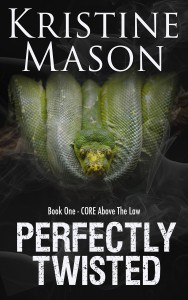 What do you get when you mix a snake-handling reverend, a necrophiliac, a cop and an ex-con? Something perfectly twisted…

Sound like the start of a bad joke? Not to Shane Monahan. The ex-con and newest recruit to the underground criminal investigation group, A.T.L. or Above the Law, has it bad for Collier County Deputy Beth Price. But ex-cons and cops don’t mix, especially when this particular ex-con is looking at going back to prison for his involvement with A.T.L.

All Beth wants is a fun distraction from the stress of her job and law school. She thinks she’s found that when she meets Shane during an airboat tour through the Florida Everglades. But Shane’s a felon, a man who could destroy her career as a deputy, and jeopardize her future as an attorney. She doesn’t know what to do—until dead bodies start showing up around the county.

When three abused corpses are found with snake remains inside them, the discovery brings a murderer out of retirement. The Reverend, as he calls himself, doesn’t like his kills being mimicked, especially by a man who abuses the dead—after all, the Reverend does have a reputation to uphold and a congregation to scam. Now it’s time to teach his copycat a deadly lesson…

Shane glanced from Beth’s eyes to her extended hand. Not once had he ever shaken a woman’s hand at the end of a date. Deciding to play it safe and by her rules, he took her hand in his. As if they’d just agreed on a contract negotiation, she gave him a quick, firm handshake.

“I’ll text you later.” She took a step backward, avoiding the bumper of her car. “Thanks again for tonight. I had fun.”

He fisted his hand. Damn it. He didn’t want a handshake. “Beth,” he said, stopping her before she reached the driver’s side door.

She hugged herself again and stared up at him. “Yeah?”

From his position, the lamppost was still bright enough to make out the disappointment in her eyes. God, he was an ass. He should walk away. Now. Because if they continued to see each other, he’d really disappoint her once she found out who she was dating.

“I don’t want a handshake,” he said anyway. He wasn’t ready to walk away. Not yet.

The corner of her mouth tilted in a sexy smile. “What do you want?”

He took a step closer and sifted his fingers into her silky soft hair. “I want to kiss you.”

She dropped her arms and settled a hand on his hip. “I want you to kiss me, too.”

His stomach tightened with both desire and dread. In the past ten days, he’d had to relearn how to drive a car, an airboat and fly a plane. He’d had to adjust to using metal silverware, along with plates and cups that weren’t plastic. He hadn’t kissed a woman in over seven years and worried he’d forgotten how to do that, too.

He let go of her hair. With his heart kicking up in pace, he slowly leaned his head forward. The subtle scent of her perfume, a seductive blend of wildflowers with a hint of vanilla, teased his senses. He’d love to strip her naked, taste her, touch her, then walk away with her perfume still clinging to his skin.

He stared at her lips. Needing to know if they were as soft as her skin, anxious to rediscover the art of kissing, he inched his face closer. As her warm breath grazed his mouth, he brushed his lips against hers.

They were as soft as he’d imagined.

Kristine Mason is the bestselling author of the popular romantic suspense trilogies, C.O.R.E. Shadow and Ultimate C.O.R.E. She is currently working on her next trilogy, C.O.R.E. Above the Law, along with a series of Psychic C.O.R.E. novellas.

Although Kristine has published a few contemporary romance novels, she focuses most of her energy on her romantic suspense stories, which she loves for their blend of dark mystery/suspense and sexy romance. She is fascinated with what makes people afraid, and is famous for her depraved villains whose crimes present massive obstacles for her heroes and heroines to overcome.

Kristine has a degree in journalism from Ohio State University and lives in Northeast Ohio with her husband, four kids, and two dogs. If she’s not writing, she’s chauffeuring kids, gardening, or collecting gnomes. Oh, and she makes a mean chocolate chip cookie!

Connect with Kristine on Facebook https://www.facebook.com/kristinemasonauthor, Twitter https://twitter.com/KristineMason7 or email her at authorkristinemason@gmail.com. You can also find out more about Kristine’s books at http://www.kristinemason.net

Kristine Mason will be awarding a $10 Amazon/BN GC to two randomly drawn winners via rafflecopter during the tour. Make sure to follow the tour and comment; the more they comment, the better their chances of winning. The tour dates can be found here:  http://goddessfishpromotions.blogspot.com/2015/04/blurb-blitz-perfectly-twisted-by.html