How do you like the cover for Hearts on Fire? I like it. I often pick up a book because of how the cover looks. Make sure to enter the giveaway at the end of the post.

This post is part of a virtual book tour revealing the cover of Alison Packard’s newest book Hearts on Fire which will be released on February 3. One randomly drawn commenter via Rafflecopter will receive a $10 Amazon or Barnes and Noble gift card. Click on the tour banner to see the other stops on the tour. 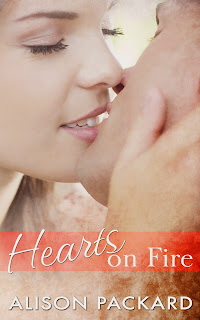 Country music star Jessie Grant has it all. An amazing voice, a string of multi-platinum albums, and a sold-out concert tour. But just before her Hearts on Fire tour rolls into Las Vegas, her lead guitarist is badly injured and is unable to play. Desperate to find a replacement before the night of a televised live show, Jessie is forced to accept help from the last person on earth she wants to see again.

Drew Carmichael has earned a well-deserved reputation as one of the best up-and-coming musicians in Nashville, without cashing in on his renowned father’s name. When Jessie’s manager calls and asks him to fill in for her band’s injured guitar player, he agrees to help Jessie out even though she cut him out of her life four months ago.

In Sin City, sparks fly between Jessie and Drew, and it isn’t long before they give in to their mutual attraction. But when the dark past Jessie has successfully hidden for ten years explodes in the media, their tenuous bond is put to the test, and both Jessie and Drew must learn to trust each other if they don’t want their newfound romantic relationship to go up in flames.

Jessie Grant stared at the cheery yellow wall in her dressing room, and fought the overwhelming urge to throw something. Anything. Her agitated gaze fell on the lovely vase of flowers that had been delivered just before the show, and she had to remind herself that violence, especially towards a perfectly innocent bouquet of pink roses and white calla lilies, wouldn’t solve anything.

But then again, it might relieve the tension that was coiled inside of her like a tightly wound spring.

“Calm down?” Jessie whirled around and met the exasperated eyes of her manager. “You expect me to calm down when my guitar player, who, unbeknownst to me, was half-wasted during our set, and decided to stage dive into the audience.” She pointed a finger at him. “That broken arm of his isn’t gonna to heal in four days. I need another guitar player, and I need one now.”

“Relax,” Wally Lindell said in a soothing voice. “I’m working on it.”

“How are you working on it?”

She propped her hands on her hips and gave him her best glacial stare. It didn’t faze him. It never did. He’d been her manager since she was fifteen years old, and he knew her better than anyone. So he should have known that she would be totally freaked out about losing her lead guitar player four days before her exclusive gig in Las Vegas, after all, he was the one who had dubbed her a perfectionist.

“How many other guitar players named Drew do you know?” Wally shot her a wise-ass grin.

“So you talked to him?” she asked, as she moved to the make-up table. She picked up the bottle of water her stylist had left out for her and took a sip. Maybe the simple task would soothe her frayed nerves.

It didn’t even come close.

“I left him a message. He hasn’t called me back yet.” Wally shoved his hands into the front pockets of his black jeans and looked her straight in the eyes with an unflinching directness.

She’d seen that look before; the one telling her that while she might be the star, he was the one who’d gotten her there, and before she went off half-cocked, she’d better let him have his say. And of course, she would. She respected Wally far too much not to listen to him.

“He’s the only guitar player we can get on such short notice that knows your set list,” he continued. “I don’t know what happened between the two of you, but whatever it is, you need to put it aside for the sake of this gig, and maybe the rest of the tour.”

“What makes you think something happened?” she asked with feigned nonchalance.

It was best not to let anyone, especially Wally, know how much she cared about Drew.

“Because you two were as thick as thieves last spring, and now it’s like he’s dropped off the face of the earth. Did you have a falling out?”

“No.” Jessie scowled, as she returned the bottle to the table. “We didn’t have a falling out. I’ve been on the road for months now and he…he’s got a life.”

A life that didn’t include her.

Originally from the San Francisco Bay Area, Alison now lives in Southern Nevada where she’s still getting used to the blistering summers and the slot machines in every grocery store.

When not working at the day job that pays the bills, keeps a roof over her head, and supports her book and chocolate habits, Alison spends most of her free time writing. But when she takes a break, she enjoys reading, watching movies, and spending time with her family and friends.

Make sure to follow the tour and comment; the more you comment, the better their chances of winning. The tour dates can be found here:  http://goddessfishpromotions.blogspot.com/2014/12/super-book-blast-cover-reveal-of-hearts.html