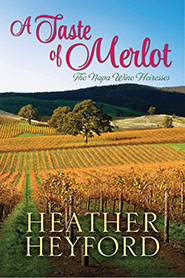 A Taste of Merlot

Merlot St. Pierre is struggling to break free from her family name. Her college classmates whisper behind her back that her passion for jewelry design is little more than a hobby, since she’ll always have her father’s fortune. But Meri is determined to prove them wrong, and with the help of a handsome jewelry buyer, she just may taste her first sip of success—as long as she can hide who she really is…

Mark Newman’s family owns a chain of high-end jewelry stores, and he’s working hard to get out from under his aunt’s thumb and prove he has a good eye and a head for business. He’s certain Meri’s designs could be the next big thing, but he’ll have to convince her that she can use her famous last name to her advantage. As their business partnership takes root, an attraction begins to flourish—but they’ll both find that love, like wine, takes time to perfect…

Mark held the ring under the dangling ceiling bulb. “You’re right, this light doesn’t do much good at all. Here, let’s see how it looks on.” He lifted the fingers of her right hand and slipped the slender coil over her knuckle. “The vine motif is brilliant, and you did a kick-ass job setting the agate. It’s contemporary, but timeless. It’ll look right on any woman, from your age on up to great-grandmothers.”

But instead of dropping her hand, he surprised her by turning it over, bringing the center of her palm to his lips to kiss it as his eyes burned into hers through the gloom of the shabby studio.

Mesmerized, she watched him plant more slow, lazy kisses all over her palm, trailing down each of her fingers to their very tips, bringing a shiver to her spine. She waited for the inevitable scowl when he noticed how rough they were.

“That’s what years of manipulating metal on a daily basis will do to your hands. No matter how much I moisturize, it’s never enough.”

“Hands that work are way more interesting than those that don’t.”

When there were no more fingers left to kiss, he took both her hands in his. “You smell great,” he murmured. “Like roses.” The shop on the Champs-Élysées still shipped bottles of Maman’s bespoke fragrance to her daughters every year on the anniversary of her death.

He bent his head to bury his nose in the lock of hair that fell near her jawline. She shivered and arched her neck to give him access. His breath on her skin made her tremble with anticipation. For what seemed like forever, all he did was gently nuzzle her neck and toy with her hair, twisting a chunky lock around his fist to kiss, then drop, only to pick up another handful on the other side, raising and dropping it, watching it fan out in the dim light of the studio.

“Where’d you get such beautiful hair?” he whispered. He wrapped one arm around her waist to ease her closer—but not close enough—and slowly, slowly drew his fingers through her hair from the top of her crown to the middle of her back in long, brush-like strokes. Tantalizing her. Provoking her imagination. She wished he’d do more with those hands soon, because she was about to melt. And then, when she couldn’t have waited one more second, he closed his eyes and angled his head, barely brushing her lips with his, only to withdraw and peer into her eyes with half-closed lids. Those eyes. They were indescribable. Sexy. Kind. All-knowing. The eyes of a hot young man with a wise old soul.

He turned his head the other way and lightly kissed her a second time . . . and to her ever-building frustration, pulled back yet again. She gave him a desperate, searching look. What was he doing, torturing her like this? He smiled. He was enjoying teasing her.

Enough. Merlot tore her hands from his, threw her arms around his neck, and kissed him squarely on the mouth. In response, he took possession of her, enveloping her tightly in his arms. Their bodies came together perfectly, hip to hip, breast to breast, mouth to mouth—thanks to those four-inch pink wedges. She felt empowered, up there at his height. She leaned in with her chin, expertly—if she said so herself—sucking his lower lip into her mouth.

Again, he pulled away—but then surprised her by taking her chin firmly. “Is that how you like it?” But she could no longer speak. He delved into her mouth with his tongue and explored her until she was panting. “Like that?” Then he did it again.

When she was dizzy, her lips swelling from the friction, he broke off and half-opened his eyes, pressing his forehead to hers, his warm breath fanning her face, his heart pounding hard against her chest.

He raised his head to gaze at her yet again, and his eyes had changed. The green was gone, replaced by jet-black disks of desire. “You okay?” he asked, his voice hoarse with passion.

Concern washed over his face.

Meri had experience with the opposite sex. Way more than she cared to remember. She knew what came next. 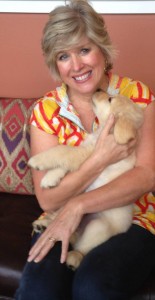 Born in the Northeast, Heather Heyford learned to walk and talk in Texas, and then moved to England. (“Ya’ll want some scones?”) While in Europe, Heather was forced by her cruel parents to spend Saturdays in the leopard vinyl back seat of their Peugeot, motoring from one medieval pile to the next for the lame purpose of ‘learning something.’ What she soon learned was how to allay the boredom by stashing a Cosmo under the seat. Now a recovering teacher, Heather writes love stories, feeds hardboiled eggs to suburban foxes, and makes art in the Mid-Atlantic. See more at HeatherHeyford.com, or visit me on facebook, twitter, pinterest, and instagram.

Enter to win e-book copy of A Taste of Merlot to a randomly drawn winner via rafflecopter during the tour. Follow the tour HERE.

2 Responses to “A Taste of Merlot Book Blast”